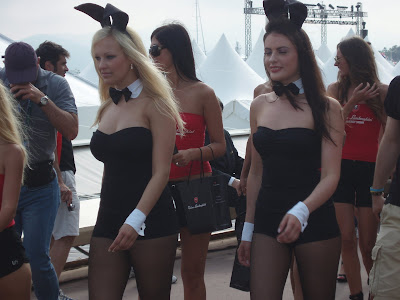 ﻿﻿
I know. I’m supposed to be locked at home outlining my next YA novel to submit it to my publisher sort of pronto. But nobody said I cannot do that in while doing also… well…? other things!
Doesn’t a writer need to move around, see and experience new situations, get inspired by people and their quirky ways to bring some freshness and originality into the work?
I know what you’re thinking: “Sure! Running after strange bunnies on the Croisette will certainly give you a creative electroshock, .”
Well, exactly! And it also gave me a good glimpse into the human soul. Because, you see, before the bunnies appeared, everyone was busy doing their thing. Like interviewing movie people, actors, producers, directors and such… and everyone looked sort of bored and blasé. Then, shazam! BUNNIES!
They all cut short their interviews, cameramen and photographers just abandoned the poor movie schmucks mid-sentence, and sprinted after the girls to get a good shot of their ears. And everyone looked terribly amused.
So that’s the thing I’ve learned about human beings today: they always go for the bunnies!