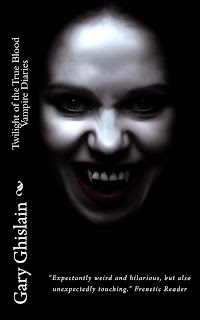 New hilarious, crazy, zany book out: Twilight of the True Blood Vampire Diaries... It's about, well, you know what!

From the back cover:
"Destiny means everyone is here on earth for a good reason.  Elise’s reason was Johan Devreau, the most popular boy in her high school.  That was until new strange tenants moved in the penthouse of her building and turned her into one of them: an undead.

Running after Johan becomes an entirely different sport, and exclusively a night time activity. But if Johan is finally warming up to a girl who can fly or materialize in his room whenever she feels like it, their love is forbidden by Vincent, the master vampire who turned her.


To live happily ever after, they need to destroy him and his spell on her. They enroll an aging YA writer newly specialized in vampire series, and their improbable team go vampire hunting, with the unrealistic hope to make it alive from dusk to dawn."