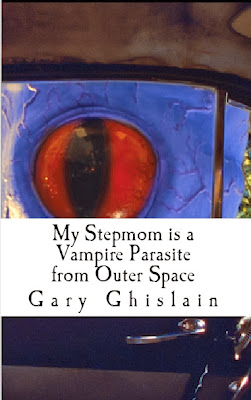 “You’re going to have to open up your mind before I tell you a few things about Jackie,” he says, squeezing himself on the bench opposite me, his stomach and Hawaiian shirt rubbing against the table. I open my bottle with my back teeth. He smiles at the trick, so I snatch his and open it in the same fashion.
“I’m pretty opened minded,” I say, giving him his ginger ale.
“Sure,” he nods, like he gets me, and says, “Your step mum is Jack the Ripper.”
I’m quite silent for a while. Even the flies got so surprised, they stopped buzzing.
“Maybe I’m not that opened minded,” I admit.
“There’s more.”
“Like what? She’s also the Loch Ness monster and the Hound of the Baskerville?”
“She comes from Outer space.”
Someone is supposed to laugh here somewhere. But he doesn’t. He just stares at me blankly like it was all obvious in his head, like the prize of milk.
A teen realizes that his evil stepmom is a creature from another world eating, digesting and replicating his entire family.

Free tonight on amazon. Conversations with a madman. Perfect short for those who think Ed Wood got it right