The Alchemy of Chemistry 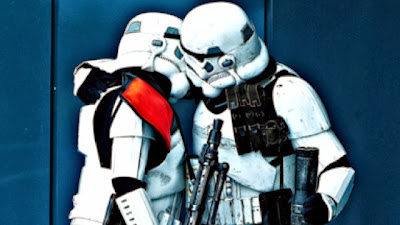 Someone told me recently that she was looking for the exact male version of herself – over the top tattoos, piercings and a certain tendency to destroy people, animals and everything on her path when under the influence – she swore that she will marry this carbon copy of herself and live happy ever after.

Though, she also told me she wanted to marry a cool young rock star and then fell into a deep snore-less coma because she was heavily drunk - so you could just question her philosophy and connect it to her high blood/alcohol ratio.

But while I was trying to find sleep myself, what she said brought all sort new questions in my head. Like, are we down to that moment where we’re not heterosexual, homosexual or bisexual anymore? Are we becoming ego-sexual, looking for the exact replica of ourselves in a back bin alley? And when we find this mirror image of us, should we just kiss it and call it love? Are cool young rock star the last relevant possible partner? And also, why is she not snoring? Is she dead? And more importantly: what is the Alchemy of Chemistry?

You know this thing you hear everywhere, like “be yourself!” – is that really the way to go? What if the person you loved didn’t like at all the person you really were? Wouldn’t you like to drink a secret potion or sign a 2 years deal with the devil to become a young rock star?

It’s really the problem with chemistry. It doesn’t work both ways, does it? It would be so easy if it did. Like, it would be just a matter of walking around and finding the cheese to your macaroni. No one will ever be sad or heartbroken. Chemistry you see: You smell  lemon, I like lemon. I smell bacon you dig bacon and it will be a perfect world. But that doesn’t work like this, does it? There’s a French expression that says that in every love story, one suffers and the other one is bored. Another version of that says that one kisses and the other one is kissed. Or if you want me to Americanize this for you: Love sucks!

"Be yourself!" Come on! It's a ridiculous idea. As if! Look at a first date in a restaurant. Look at the poor guy. He’s not being himself. He’s so confused as to what she likes, he’s so trying to tune into her desires, he keeps transforming into a dozen different people like the  X-1000 melting in liquid metal at the end of Terminator 2.

Okay I figured out a quick formula for you because I need to end this post and return to my lab and my many contracts with the Beast.

Her love = her expectation multiplied by your number of tattoos minus your age plus the number Jagger shots she drank multiplied by strange encounter with radio nova executives divided by the distance from you to a young rock star.

Otherwise,   you can always try to be yourself and look for the perfect mirror version of you. I wouldn’t like that. I think meeting someone so different that it would appear they come from another planet is the real deal. But that’s me and I’m always – ALWAYS! -  the one not sleeping.