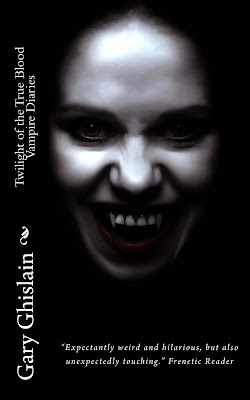 Destiny means everyone is here on earth for a good reason. Elise’s reason was Johan Devreau, the most popular boy in her high school. That was until new strange tenants moved in the penthouse of her building and turned her into one of them: an undead.
Running after Johan becomes an entirely different sport, and exclusively a night time activity. But if Johan is finally warming up to a girl who can fly or materialize in his room whenever she feels like it, their love is forbidden by Vincent, the master vampire who turned her.
To live happily ever after, they need to destroy him and his spell on her. They enroll an aging YA writer newly specialized in vampire series, and their improbable team go vampire hunting, with the unrealistic hope to make it alive from dusk to dawn.

“I can’t let you spend the night in here all by yourself,” he says, sliding away from the stairs, and somehow he’s near me in no time. “You’ll sleep at my place. I’m sure you’ll find it more comfortable.”
There’s a long silence while he stares at me and I’m trying to find a way to tell him politely that he scares the shit out of me and that would rather eat my own eyes than follow him anywhere.
“I’m fine, really,” I say. “I think… I need to spend the night here. It’s what Father Francois would have wanted.”
“How would you know what Father Francois would have wanted? You didn’t know him at all, did you?”
“Eva,” I say and let her name hang there in the silence for a while.
“What about her?”
“She’s picking me up early in the morning. I have to be here when she comes.”
“I’ll phone her and tell her not to worry about you.”
“I just want to sleep here. If that’s okay with you.”
“Let’s not be weird about this,” he’s so close now, I have to step back just to keep breathing. “I have a very large home, plenty of guest rooms. You don’t have to sleep here with a dead body upstairs.”
I take the dead body over that guy any day of the week.
“Eva told me to stay here,” I lie.
“Don’t be silly.” He was in front of me and now he’s behind me, putting his hands on my shoulders. I freeze like a done prey. “Just come with me, Gary. I promise it will be fun.”
“I’m pretty sure I’m going to stay here,” I say, my voice sounding terribly weak.
I feel his grip tightening on my shoulder, his nails biting through my t-shirt, and then, “fine,” he says, sliding away from me. “Hope I’ll see you again before you leave.”
“I’m leaving first thing in the morning.”
He opens the door. Or did the door open for him? The rain’s beating down on the porch. He doesn’t seem to care. He gives me an amused grin again, over his shoulder, the one he had when he was leaning over me silently in the library. “I believe we’ll meet again,” he says and slides out into the night, the door magically closing behind him.
I stand for a while in the middle of the lobby and then, my legs give up and I sit down on the floor with the grace of overcooked spaghettis.
It’s going to sound like hysteria again: But… THIS GUY WAS FREAKING DRACULA!
Link To Kindle eBook On Amazon